Music is a part of everyone’s life, but are you truly listening to what the artist originally intended? On June 20th at the historic Alumnae Theatre in Toronto, Canada, Bluesound, in collaboration with MQA, will hold an exclusive panel discussion for Toronto Meetup members where they’ll lead an engaging conversation around music, technology, and the opportunities that exist today for listening to studio-quality recordings.

Hosted by Alan Cross and the Music Technology Group, the panel will explore whether or not original in-studio performances sound different in comparison to what you hear through your speakers at home. Sign up for the event now at meetup.com and join us as we tackle hot topics from all sides of the industry, including designing and engineering audio products for hi-res music, the recording and mastering process for MQA music, and where you can find hi-res music content and specifically studio master files.

The panel discussion will feature experts such as:

Alan Cross, Moderator and Co-founder, Music Technology Group
Alan Cross is a well-known award winning broadcaster, consultant and music writer.  He is best known nationally and internationally as a long-time personality on 102.1 the Edge/Toronto and the host of the syndicated radio series The Ongoing History of New Music (on the air since February 1993). Alan is also involved a vast array of projects, most of which involve the intersection of music and technology – such as the Music Technology group.

Mike Jbara, Chief Executive Officer, MQA
A native of Detroit, Mike is the CEO of MQA, having joined from Warner Music group where he held roles as head of studios, president of ADA Worldwide, president of WEA Corp and most recently corporate EVP of Technology. Together with Bob Stuart, Mike has been leading the MQA team and securing a variety of deals for its technology with device-makers and digital providers, including Tidal, Deezer, LG and Sony. Mike continues to work very closely with the music labels and studios to convert their catalogues into the MQA format, as well as evangelising hi-res music at industry events.

Greg Stidsen, Chief Technology Officer, Bluesound
Greg is a 40 year veteran of the Audio Industry, spending the last 20 as head of product development for Lenbrook’s NAD Electronics brand.  Greg was instrumental in the development of Lenbrook’s streaming audio brand, Bluesound, which was introduced in 2012.  Honored by CE Pro Masters Class and active in the Digital Entertainment Group, Consumer Technology Association and CEDIA, Greg is a frequent speaker, panelist, and ambassador for all the Lenbrook brands.

You’ll also get the chance to grab some pizza and join us for an intimate listening session where we’ll demo MQA on Bluesound and teach you how to set up a studio-quality system at home. 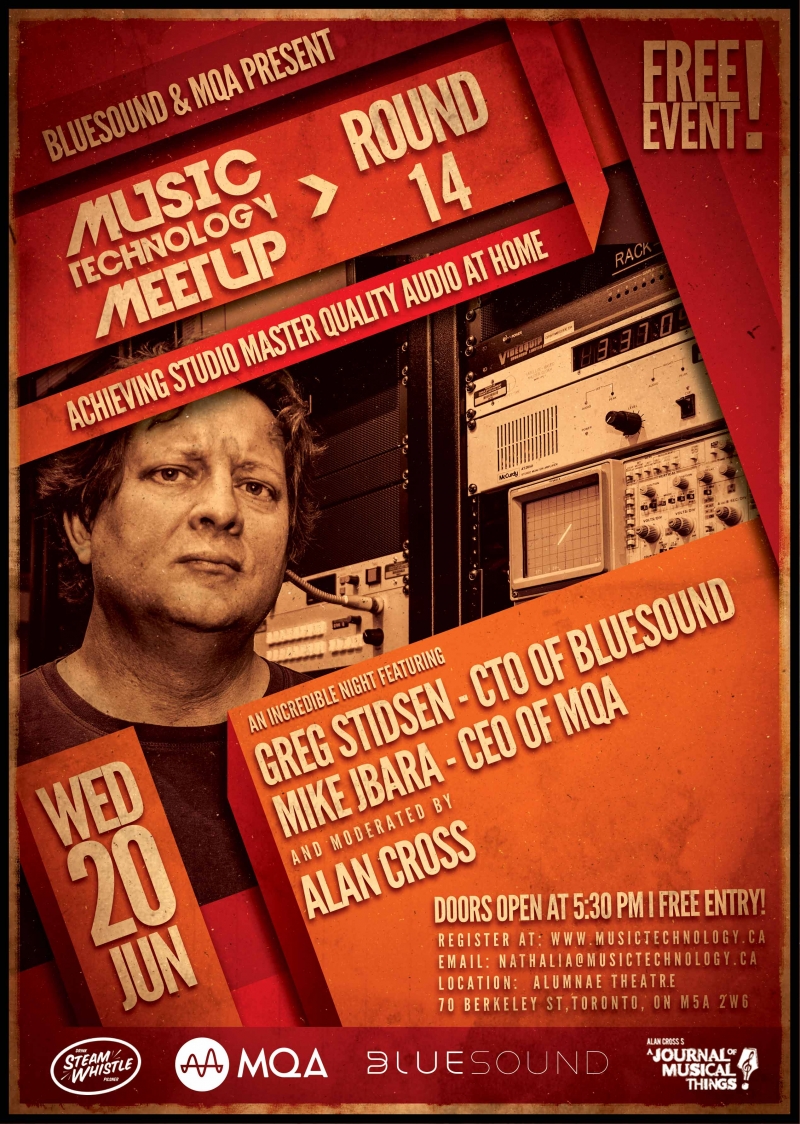